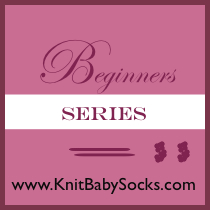 You just need a few items to get started. It may sound like a lot but really it’s not much.

If you don’t have a darning needle to begin with, it’s okay. You can eventually get one since you’ll need it for the end of your baby sock project.

What type of needles do you need in order to make a little sock?

While it doesn’t seem like a standard way to make socks, single-pointed knitted needles can be used. I prefer using bamboo or wooden double-pointed needles because I like the flexibility of getting accustomed to those. Then you also have the option of using circular knitting needles, which are needles that are joined together by a flexible cord.

I have found that anywhere between a 4.0 mm to 2.75 mm double-pointed knitting needles make anywhere from a decent thick baby sock to finer “shoe sock” ones.

I plan to explain more of this later.

Your Biggest Ticket to Your Success

I believe your motivation and enthusiastic drive to want to learn how to knit a pair of baby socks is key to your success. It’s one of the keys to do almost anything in life.

Having that drive has helped me to be self-motivated and able to accomplish much. It has helped me to knit a few cozy pairs of socks for my precious children (baby and toddlers) and for baby shower gifts.

Knitting baby socks still doesn’t come easy to me but I am happy to share with others how this beginner knitter was able to do that. I think it’s a wonderful skill to learn. I believe it’s an especially helpful survival skill to learn if you are in you are or will be in your child bearing years and live in a cold region.

I want to try to develop different ways that make it easy for just about anybody to learn how to knit baby socks. There will be beginners who have no knitting knowledge. That’s good! There will be some people who are experienced in knitting but not in baby sock construction. That’s wonderful too!